5 Ways to UP Your ALLY Superpowers

When you know yourself and you have worked to find your unique superpowers, you sometimes can take for granted your position of power and sit back in your seat. It’s easy to forget that on your path to success you had allies – people who stood up for you and paved the way.

Can you remember a time when you were faced with a difficult situation and there was no one else around who could help?

It’s more common than not for someone in any meeting you attend. But you can take up the mantle of ally and help to change things for the better. Join me in this blog post as I share 5 simple ways to turn up your allyship so that you remember that when advocating for others, you help change the world.

When I was first starting out as an actor, believe me I was not good. I would just loudly take over the stage and I was obnoxious. Fortunately, I had a few great teachers who showed me that it’s the subtle moments that land on your audience’s heart. One of those mentors paved the way for me to take some acting classes one summer in NYC.

She opened the doors for me to learn more about my craft of acting. It was not easy, I wasn’t that good at traditional acting, and I often got called out in class. But my ally was an amazing advocate for me, coaching me, introducing me to everything she knew and people she had connections with. So much so that when I returned to my own city, I was a better, more confident actor for it.

That same year, when I went to audition for a bit part in a play written by a NY comic, I was able to drop my limiting belief that I wasn’t skilled enough. With that audition, I landed a part in a show that went to the main stage, then the Kennedy Center, and then to Broadway.

Later, when I changed my career and moved to SF to rediscover myself, allies helped open the doors to new jobs, careers, opportunities. When I first worked in business, it was because my friend Michael opened the door for me. He went on to continually stand up for me when our employer criticized my look “too gay”, my delivery “too loud”, my style “lose the bleached blonde hair!” He believed in me and demonstrated it whenever it was necessary.

At every major life change, I have gotten help from an ally. Becoming an ally for others, especially when you are in a position of power, is essential and here are 5 fantastic tips created by Gavriella Schuster, former VP of Microsoft’s’ Commercial Partner Program:

Be – Become an ally, a leader, an agent of change – work with intention. Become an intentional leader of the change you want to see. Speak up for those who do not have a voice. When you are in a room and someone says something that is fundamentally against the equitable world you want to live in, stop the action and say something.

C – Connection – help to forge key relationships to help create support for others. Take the time to pull leaders aside, share what you know about the person, and directly ask them for their support. Don’t just assume that they know what that might look like, spell it out for them. When you are in a room full of people who aren’t interested in listening to all voices and perspectives, use your voice to ask to hear from everyone, then support the quieter ideas by validating them.

O – Outreach – look to pave the way for others to be successful. Find or found an organization that is committed to equity and inclusion. Last year I was invited to join the board of Women in Cloud because the number of women going into the tech industry has dropped over the last 20 years, not increased. And with 70% of companies moving to a digital platform that means all those ideas and how we access them will be created by men. That’s a scary thought if you consider that this will eliminate the female perspective, the more relational aspects of our human connections and your daughter’s voice won’t be counted. The more intuitive nature that women bring to the conversation, to the learning will be missing.

M – Mentor – I could never have broken into the multiple careers that I have had without the help of my mentors. Mentors guide you to make better choices, they open doors to new clients and even launch new career directions. Mentors coach you through the tough times and debrief you after a presentation, a meeting, or a project. Mentors in my world now are both young and old, many wiser in the digital space. In turn I share what I have learned about making money, expanding relationships, and building successful businesses.

E – Empowerment – This is you reminding your peers about the value of inclusivity in creating products, building out ideas, creating policy or just bringing another perspective to the table. Validating the quiet voices in the room that come from the people you know are underserved in our current culture will create a more equitable experience for all of us. Be brave enough to be the tie breaker, become the doorman on the elevator of life, pressing the button to help lift everyone, everywhere in every moment.

In summary, who you know and where you are in the work world matters to someone looking to move up in their career, find their voice and be asked to use it (and amplified when they do). Your ally ship matters. Find a way to BeCOME the ally you want to see in the world. Remember those who helped you reach your goals and pay it back by using your voice to actively support those who need to be heard.

See you out there! Get tips and insights delivered to your inbox

You’ll be in good company! Join the good people at Nike, Starbucks, Intel and more and sign up FREE today.

More from the blog Start With Why Not

If you want to enjoy the luxury of finding your “why”, try to activate the “WHY NOT?” 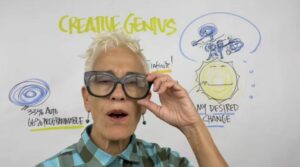 Sweeping the Path Clear to Creative Genius You

We are focusing on outcome to the infinite power in the next few weeks. To get to that outcome you have to constantly sweep that path clean for your Creative Genius. 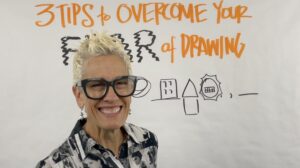 3 Tips to Overcome Your Fear of Drawing

Most people appreciate drawing, but when they are asked to sketch a picture, they freeze. You don’t have to!